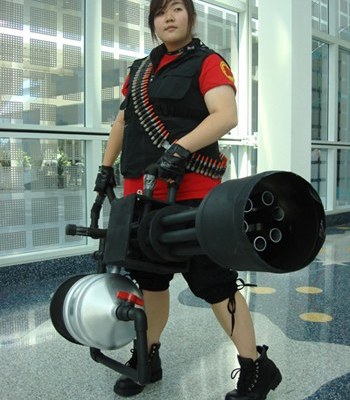 I love cosplayers with all my heart and soul, bitching about big, giant wings in convention hallways and dealer’s rooms notwithstanding.  As someone who cannot sew to save my life, I am in awe of them.  I mean, I’ve done some, but only real simple things.  I’m planning on going as Little Lotta from the old Richie Rich comics because I’ve always loved the character, but she also brings me to another problem with me and cosplay.

There is a real dearth of fat characters, particularly fat female characters, to cosplay.  And an awful lot of Geekdom is just as wretchedly shallow and horrible (especially to women) with the body-shaming as any mundane.  To these jerks, it doesn’t matter how well-made and well-fitting the costume is, if the person (particularly if it’s a woman)  is fat or even less than model thin, they will be the subject of merciless bullying and harassment, from all genders.  This is further evidence that geeks are not near so “evolved” as they’d like to believe themselves.  Just google “Fat cosplay” and see what comes up.

Or rather, don’t.  I’m not kidding DO NOT DO THIS.  Just take my word for it.  It’s vile.  It’s a bunch of body-shaming, bullying horseshit and none of these assholes would dare say it to anyone’s face because they’d probably get punched.

Many of the people derided for being fat by these neanderthals aren’t actually fat, or even overweight.  The world is just full of douchebags who know that the easiest way to tear most women down is by calling them fat.  So, screw those jackoffs.

However, the fact that it IS difficult to find fat characters to cosplay, particularly if you aren’t interested in cosplaying villains.  I mean, suppose there’s always Totoro.  Oh snap, now I want to do a “sexy Totoro” costume!  (Not really.)

Now, some people play the thin character cosplayed by a fat person thing for laughs, like the group of Sailor Scouts cosplayed by hairy, bearded, fat middle-aged men who smoke cigars while wearing their incredibly accurate Sailor Scout uniforms.  Some people really just love a character and want to dress up as that character, regardless of size.  And that is perfectly FINE.

See, they aren’t doing the costume for YOU.  They’re cosplaying for themselves.  Just as thin women (and men) you might approve of aren’t actually cosplaying for you either.  For the most part those costumes are labors of love.  They do it for themselves and to show their devotion to the fandom.  And if anyone, fan or creator, mocks them for it, you’re really just outing yourself as a sub-standard human being.  But I’m not worried, I’m pretty sure your personality will remove your genetics from the gene pool without any problem.

Seriously, Geeks (and everybody else), get the fuck over yourself.

What do you care what people wear?  Because, seriously, if seeing a fat person is the worst thing that happens to you in a given day, count yourself fucking blessed.  Also, really, think about that poor fat person who has to be out in public near a self-righteous, judgemental asshole like you.  I mean, it’s no picnic restraining yourself from punching some sexist, size-ist douche who can’t keep their worthless douchey opinions to him or herself.

Now that I’ve gotten all ranty-pants, I’d like to direct your attention to a Tumblr.  Oh, Tumblr how I love thee.  FuckYeahFatCosplay. If you’re looking for some good ideas or inspiration, I highly recommend this tumblr.  I believe I will feature them on the GGR tumblr.  Thank you, FuckYeahFatCosplay for restoring my faith in humanity.