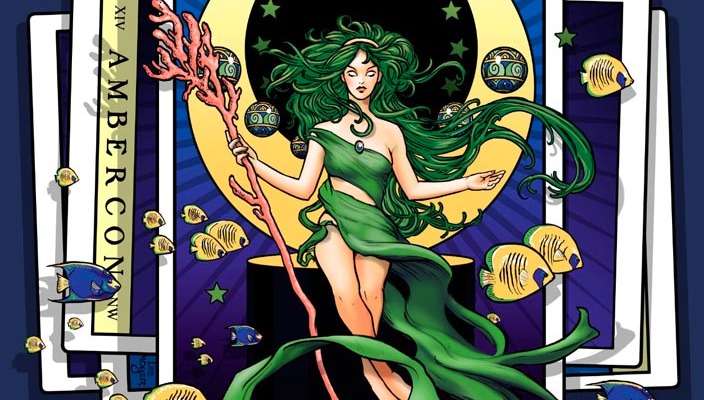 As usual, I had a fantastic time at AmberconNW.  For those of you who are new to the blog, AmberconNW is a little teeny roleplaying convention just outside of Portland, OR, devoted primarily to the Amber Diceless Roleplaying Game and other games that can be bent to work in the world of Amber as written by Roger Zelazny and mutated by years of fanon.  The population has been holding steady right around 110 each year, and there are seven gaming slots over the course of four days.  This year I did not run anything as I could not get my shit together to come up with a coherent plan, but I did play in several really fun, awesome games.

Slot 1:  Lady Faiella’s Finishing Academy, run by Dawn Vogel.
Lady Faiella’s is a school for the young scions of Amber.  The descendents of Oberon’s children are all rounded up and brought here to learn how to effectively rule over Shadow.  Often times this includes learning that they aren’t who they always thought they were, including finding out their parents may not have been their parents.  So, we were rounded up from very different Shadows and brought to Lady Faiella’s.  One of our number was “murdered” immediately, and thus began the mystery solving.  Honestly, my favorite parts were the character interaction.  My character came from 15th century Florence, and was very, very sheltered.  So I spent a fair amount of time being shocked and scandalized by everything. There is talk of this being a recurring game, and one I’m looking forward to. (Amber Diceless)

Slot 2:  Hellcats and Hockeysticks, run by John Kim.
This was not intended to be a continuing game, but at least two of us from the previous year signed up to reprise our characters, myself as Darling Black, Mistress of the Dark Arts and raging Joy Division fan, with my purple plush kitty that houses the soul of an Italian hitman, and our Fixer Mae, played by my friend Meera.  We had three new players, and were just AWFUL as usual.  One of the girls had a penpal from an Afghani girls school, who just happened to be coming to visit.  When the British Government realized their mistake, they sent the SAS to retrieve them.  Much seduction and hilarity ensued.  Culminating in the destruction of an airport by a lesser demon, and various bloodshed and mayhem.  Again, as usual. This game was not Amber related in any way.

Slot 3:  Grimm: Quest of the Black Rabbit, run by David Young.
My main complaint was that the GM was not conversant enough with the system, Grimm,  to offset it’s deficiencies.  The combat system is really clunky and not terribly efficient, and it really needed someone who either knew it well enough to just go, or someone who cared little enough about rules to just handwave shit.  I like the setting, and the set up for getting all of our characters involved, while a skidge on the deus ex machina side, worked wonderfully.  Once he got us all looped in, we worked well together as a team, with a fair amount of infighting and bickering, as you’d expect from a group of tweens.  Again, character interaction was really the highlight of this game.  I had a good time, but it did highlight for me areas I had thought might be problematic from my own reading of the rules (if there is a game of childhood horror, I own it). This game was not Amber related in any way.

Slot 4:  Nine Children in Amber, run by Karen Wells.
So. Much.  Fun.  I played 5 year old Flora, who was a tomboy and hated all that pink crap her father ordered the nannies to dress her in.  I was joined by 10 year old Corwin, 9 year old Dierdre and 8 year old Fiona.  The older kids got to go to the ball, but we weren’t allowed, so we went off on our own adventures.  We crashed the ball, which was ruined when Corwin dropped a snake down Fiona’s dress, we stole a dessert, went down to the dungeons, tried to get into the Pattern room, played in a fountain, and discovered a little girl in a mirror.  My personal highlight was having a screaming meltdown at Corwin, when he suggested that Fiona, who had gone through the mirror, was being eaten.  It was just a lot of fun, and a lot of silliness, and a lot of picking on the only boy in the group. (Amber Diceless)

Slot 5:  Homecoming, run by Jen Schwarting.
After being gone for three years fighting the Patternfall war, regular rank and file Amber soldiers have to find their way home after their wizard dies.  Along the way, we get waylaid by a false Amber, and finally make our way to an Amber more than decimated by the chaos storm generated by Oberon’s death.  I was a complete slacker and did not get my character concept in on time, and so played one Jen came up with for me.  It was for the best, really, since my concept was far too close to someone else’s.  It was a good, fun game, a fair amount of pathos involved.  I always enjoy Jen’s games.  (Amber Diceless)

Slot 6:  Reunion Wishes, run by John Kim.
I had not realized this was a LARP when I signed up, but that’s because I obviously wasn’t paying attention.  I generally don’t LARP, because I get all self-conscious, this is not a fault of LARPs, this is all my own damage.  However, I had a lot of fun.  Something supernatural happened to a group of us our senior year of high school, that gave us all powers.  One, the Believer, found a way to send us back to our bodies the night it happened, because she wanted some answers.  Most of us were in deep denial, and she had a hard road convincing us to go along with it. I spent a large chunk of time “drinking” and insisting nothing had happened!  NOTHING!  Ultimately, all but one of us went back and changed things, including writing notes to ourselves on our arms about things to do differently.  Again not Amber-related.

Slot 7:  Portland Titans, run by Dawn Greenlee.
Superheroes in Portland, OR.  Ok, my character was actually a super villain who was going straight in order to be closer to her hero crush, but the same idea applies, “Well, we should just break in there and… (looks around), Oh, right, HEROES.  Got it.”  We had an equivalent of Witchblade, my character who could walk through shadows, and Columbia, the living embodiment of the Columbia river.  So, some of us are of Amber blood, and some of Chaos, and we don’t even know what to call it.  We just know there are sides, and technically some are on one side, and some on the other.  But we’ve mostly decided that we’re on our side and those jackoffs screwing with our planet are the other, and they’re going down!  This is going to be an ongoing game, and I can’t wait to play it again!  (Amber Diceless)

The biggest downside to AmberconNW is that the rest of my life is not 24/7 gaming, drinking and being surrounded by wonderful people who get all my jokes and like pretending to be superheroes, small children and medieval killing machines.   There was much drinking, conversation, soaking and cuddling in the soaking pool.  Absolutely fantastic.  I am so sad when it is over every year.

However, I have started thinking about what to run for next year.  Hogwarts: The Burning Times.  Essentially running a game at the early days of Hogwarts, set in medieval times.  I think it could be a kick.  Also, it has been requested that I run Amber Family Therapy again, which is always fun.  And I have an idea for a non-Amber-related game which could in fact be converted easily.  Victorian Monster Hunters recruited from asylums:  “You’re not crazy.  Those things are real.  And I’m going to teach you how to kill them.”

So, that’s my Ambercon in a nutshell.  I’m sad that it’ll be another year before we get to do it all again.  But I suppose I’ll have to live.

Lee Moyer’s website, please go check out his other Amber designs, as well as the amazing pin-up calendar he has for sale.