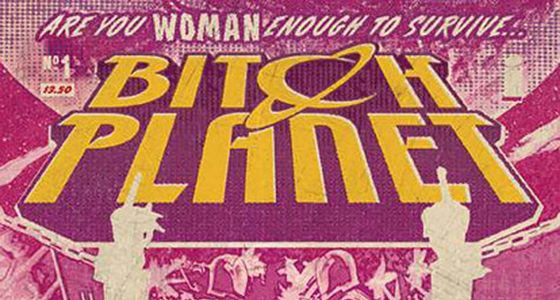 So, I finally tracked down the first three issues of Bitch Planet, after they’ve been sold out absolutely everywhere since issue one came out.  I finally broke down and got a comic box again, just so I could have things pulled for me and not have to trust to fate.  So, there goes any disposable income I might have had.

When Kelly Sue DeConnick started writing Bitch Planet, she actually sent me some scans of the pencils for the characters.  And I was totally excited about it.  Then the waiting began.  Then surgery happened, so I didn’t have any extra money, nor the will to live or read anything.  But now I have, and I just want to say…

Ahem, grown up pants back on.

Bitch Planet is a comic written by Kelly Sue DeConnick with art by Valentine DeLandro.  It focuses on the fates of women judged wanting by a society that is ours taking current standards of how we expect women to behave to their natural extremes.  Women judged “non-compliant” (oooo, I have a mad on for that term) are sent to detention centers in space, colloquially known as Bitch Planet.  There’s a lot of violence, both physical and psychological in these books.  After reading the first three I find myself somewhere between triggered as fuck and elated that someone gets it, and has managed to articulate it in an accessible art form.

The offenses women are cited and jailed for range from insubordination (in one frame a man threatens to report a woman because she rolls her eyes at him) to “aesthetic offenses,” and I think you can guess what at least one of those is.

In the first issue, we see a white lady named Marian Collins.  Pages dealing with her being sent to Bitch Planet alternate with scenes of, one presumes, her husband pleading for his wife’s release.  He offers the official an envelope of money to arrange for his wife’s release, and to clear up any potential problems in the future.  I don’t want to tell you more than that, but it pretty aptly sets the tone for the series, I think.  The cast features a lot of women of color including Penny Rolle, who is fat.  I love Penny a lot.  I love all the prisoners of Bitch Planet a lot.  But Penny speaks to me on a deep visceral level.

Every third issue will feature one of the characters as a spotlight issue, with a guest artist.  Penny’s is the first of these, and it’s awesome.

There’s a lot in here about body politics, about race, about gender, about the ways women are expected to shrink themselves down in public, literally and figuratively, and honestly, none of it is anything any woman hasn’t heard before.  It’s all just taken to the its logical outcome.  Like the fact that states are now jailing women for having miscarriages, thanks to the forced birthers.  That’s some next level, dystopian, Handmaid’s Tale bullshit right fucking there.

I have a dear friend who had lap band surgery, and then when that failed (and fucked up her stomach), had gastric bypass (the one where they actually mutilate your stomach), and when the weight started creeping back on again told me, “I just have to try harder.”

I can’t imagine trying harder than mutilating your digestive system.  What’s next?  Subsisting on an IV drip?  Meth?

Bitch Planet is not so far away as some might think, guys.  The things that scare me about this comic are the same things that scared me about the Handmaid’s Tale.  I can already see the roots of that bullshit in the society we inhabit.  And it scares the fuck out of me.

Which is why I’m not gonna be quiet anymore.

I took a few months off here, in part because surgeries and hospital stays and oh my god recovery.  But also in part because I didn’t know if I could deal with another year and a half, two years of death and rape threats in my in box every time I opened my fucking email.  I STILL get hate from the Dickwolves bullshit and how many years ago was that?  As I’ve said before, as I watched people around me being doxxed, I had a talk with my boss about what I might need to do and the very real possibility it could happen to me and what that might mean.

Fortunately I have an awesome boss.  All of them, actually.

“Unless someone like you cares a whole awful lot,
Nothing is going to get better. It’s not.”

I have to say, I’m elated as fuck that Bitch Planet keeps selling out.  My local comic store can’t keep it in stock.  This gives me a great deal of hope.  My friend Alexandra and I are contemplating getting our Non-Compliant tattoos together.

So why are you still reading this?  Go get it right now.