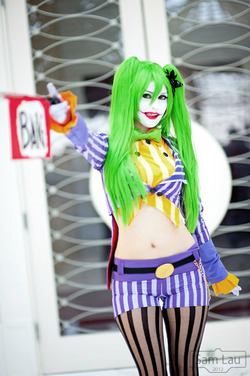 Ok, first off, for all my geeks going to PAX this weekend, re-read this post, and remember to tip.  Because when you don’t tip, you give us all a bad rep and you’re mistreating the people who serve your food and drink.

However, there is one trend in Cosplaying that makes me a little cranky.  And that is the trend for women who cosplay male characters to sexy up those characters regardless of whether the male character themselves would be up for the sexy.  Look, a female Gambit in a mini skirt and half-shirt?  Hells, yes!  I can totally see a female version of the Cajun like that.  Oh yeah…

A female Cyclops in a half-shirt and mini skirt?  Not so much.  I mean, I like Cyclops as a character, but he’s kind of uptight.  I just do not see that character trading in fully clothed for half-dressed just because you changed gender on them.  The same goes for Captain America, or Thor.  Now a booty short wearing Iron Man?  Oh yeah, Tony Stark is totally that kind of tart NOW.  Give that personality a hot female body?  And well, Loki’s been female and we’ve all seen what she wears.

I guess what I’m saying is that if the character’s a flirty, sexy dude, then sure.  I can see making the female analog a flirty sexy woman.  But if the male character isn’t like that, why the fuck is the female version? I can totally see a sexy female Nightcrawler (apart from Talia, his daughter from another reality, who was a flirty sexy Nocturne).  I just don’t see a flirty, sexy Colossus.

Why is the default for any female costume sexy?  Regardless of the costume’s backstory or purpose, it’s always got to be sexy.  And what’s with all the fucking belly-shirts, guys?  This happens with “armored” characters, too.  And many, many hilarious comics and film shorts have been created surrounding the trope of women’s fantasy armor.  I mean, it’s not like we keep our organs in our abdomens like guys do.  If you look at comics, we very obviously keep them in our breasts, or in some cases, apparently, our thighs.

Again, I’m not saying these cosplayers are “doin’ it rong,” I’m just curious why they feel the need to take characters who aren’t “sexy” and make them so, just because it’s a woman doing the dress up?  I mean, the one Captain America cosplay with the corset and the wool-stockings and everything is fucking beautiful and amazing and all that, but really?