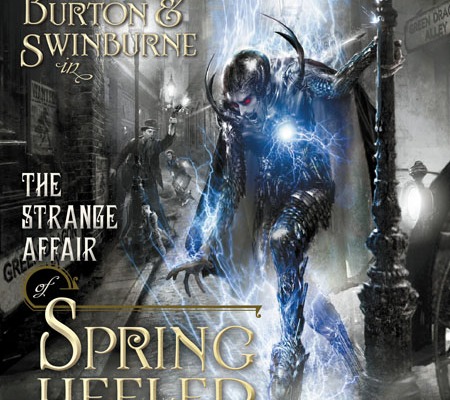 Ok, I’m not a huge steampunk fan.  I have, in fact, been heard to opine that steampunk is what happens when goths discover brown.  But honestly, I’m pretty content to live and let live, and I do enjoy well crafted costumes, regardless of subject matter.  So, I have no particular beef with steampunk.  I don’t go out of my way to consume steampunk media, but I am also not fleeing from it as if it were a plague on my house or any such thing, and I have several good friends who are intimately connected with the steampunk movement here in Seattle, so whatever.

So, when I saw the first “Burton and Swinburne” novel, I was intrigued by the suitably lurid cover, and the fact that the protagonists were Sir Richard Francis Burton and the poet Algernon Swinburne in an alternate (steampunky) universe, but not overly enthused about it.  Then my mother in law read them and loaned them to me.  And I hemmed and hawed and put it off, but finally she said she wanted them back later this summer to loan to one of the Geek Husband What Rules’s cousins, so I better get to it.

I did not expect to like these books as much as I did.  Hell, I burned through the first one in a frenzy of reading matched only by my devouring of the Malazan or Harry Potter books.  Seriously, the characterizations are fantastic, the dialogue is excellent, wonderful pacing, and the alternate history is MAGNIFICENT!!  Seriously, it is so difficult to get that right, because you have to take so many factors into account, and I am phenomenally picky about that stuff, just ask anyone who’s ever tried to run an alt history game for me.  History major!  Also, a history major who started out as a lit major with a particular fondness for pre-Victorian and Victorian British poets.  Sigh…

So, the first book, The Strange Affair of Spring Heeled Jack,

takes place in 1861, three years before John Speke, Burton’s exploration partner, killed himself in our timeline.  Only the book starts out with Speke’s near death, and the timelines which are already a little off, go wildly divergent from there.  The legend of Spring-Heeled Jack is brought to the fore and the government employs Burton to get to the bottom of it.  There are steam-powered vehicles, mad science, psychics, and it’s all exceptionally coherent.  And of course many matters are confounded by the vagaries of Victorian society.

The second book, The Curious Case of the Clockwork Man,

, takes place not long after the events of the first book.  It sees Burton, still working for the government, now with Swinburne as his official assistant.  A claimant for an estate who was presumed drowned has resurfaced, but he looks nothing like the man he claims to be.  This is based on an actual case that occurred in Victorian times.  Connected to the case is the theft of some black diamonds, and a myth that there might be more.

Both books are shot through with actual Victorian history, that is bent in new directions by the fictional events, and re-shaped by them.  At the end of each book, Hodder supplies a short appendix which explains the historical figures each of the characters are based on and where they differ from the characters in the fiction. As I said, he does alternate history really, really well.  The only other authors who do alternate history well-enough for me to enjoy it are Eric Flint and Harry Turtledove.  I frequently love the IDEA of alternate history, but the execution either makes me crazy or just falls flat.

The characters are consistent and delightful.  I love Swinburne so much.  I mean, I already enjoyed his actual poetry, and it is true that he was, um, as Hodder puts it, “a follower of de Sade.”  Actually a follower of Von Sacher-Masoch would be more apt.  The kinky little drunk is hilariously fun to read, and has just as much agency as  his rough and tumble explorer friend.

I highly recommend these books, particularly if you enjoy steampunk, but even if you don’t. They’re engagingly written, quick reads and loads of fun.  Wonderful pacing, dialogue, and plot work.

There is a third book out, but I have not gotten it yet.  But soooooon…  It will be mine.