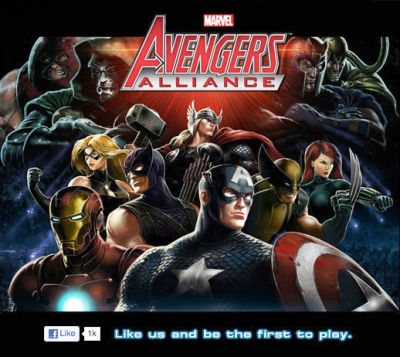 So, I know that Facebook games are supposed to be for women, the hated and maligned “Casual Gamers.”  As if fucking around on Facebook games is going to somehow take away your penis or something, I don’t even know.  But the fact remains, there are games on Facebook, I am a gamer, I like games, so I play Facebook games.  And don’t even lie to me, you do, too.

The latest game I’ve started playing Marvel: Avengers Alliance is different from your run of the mill Facebook game in a number of facets.  A.  It’s based on a licensed property, which doesn’t happen often.  Mostly it’s things that they can make look kind of like something else, or as close as they can get without copyright infringement.  But this is an actual licensed product with actual Marvel superheros.  B.  While it does have some “farming” aspects to it, it also involves turn-based combat, which is not unique, but Facebook games do tend to be more farming than fighting.  And now for the biggest difference:  For the first two weeks I was playing, I was the only woman I encountered.

After two weeks my friend Charlotte joined.  However, apart from the two of us, even in the PVP arena, I have encountered no other women.  Most of my other Facebook games either skew heavily female (Fishville, Monster World) or about half and half (Zombie Lane).  This is the first time that I’ve ever seen a Facebook game skew so heavily male.

The game itself is fun.  The graphics are beautiful.  The majority of the female characters are posed relatively realistically.  They are a bit cheesecake-y, but that’s to be expected.  The only really egregiously posed character I’ve encountered has been Black Cat, but I’ll be honest, I’ve always found her a bit tacky.

I’ve enjoyed the hell out of playing this game.  It goes quick enough to keep me, with my hummingbird attention, span occupied.  The advancement system makes sense, well, except for Ms. Marvel.  I’m still not sure why her Kree Strike is the second level attack, it doesn’t do as much damage as her Photon Blast, and it costs more in stamina.  Although I freely admit there may well be something I’m just not getting.

And yes, before you ask, I’ve already unlocked Nightcrawler, and he’s actually really damn useful.  I also love She-Hulk and Ms. Marvel.  I spend a lot of time trying to do as many missions with only female characters as possible, which works out really well.

The over-arching plot makes sense, or as much sense as any comic plot needs to in order to bring all the heroes and all the villains ever together so you can kick ass.  For each of the boss fights, there is a character that you must team up with, according to canon rivalries, but they work.  And the story dialogue is pretty amusing and engaging, like with Bullseye, “Is the blind guy here?  I love killing the blind guy!”  And then you kick Bullseye’s ass and there is much rejoicing.

You collect various types of points in the course of the game to be able to recruit other characters, and buy level advances for your various characters.  You can also opt to pay real money for “gold” in order to buy more turns, more command points (to recruit) or more S.H.I.E.L.D. points to pay for your characters to level.

Here I do have to insert something in response to a TED talk on Facebook games I saw a while ago.  He said that no one could foresee that people would pay for Facebook games, that is for games they couldn’t actually possess.  My response was, “Did you miss arcades in the 1980s and 90s?”  I cannot tell you how many quarters I shoveled into arcade games throughout my teens.  I probably could have bought any home video game system several times over, but part of the enjoyment in video games was playing them and getting high scores in a public forum.  You get high score, or in the top ten, and you get to put your initials in so everyone sees how awesome you are.  Facebook games display  your levels to the friends who are also playing that game, so that everyone sees how awesome you are.  So, yes, I totally understand why people pay for things in Facebook games.

So, yeah, if you’re on Facebook and you like Marvel comics, I recommend checking out Marvel: Avengers Alliance.  It’s a fun way to kill some time, maybe on breaks at work, or in the evenings.