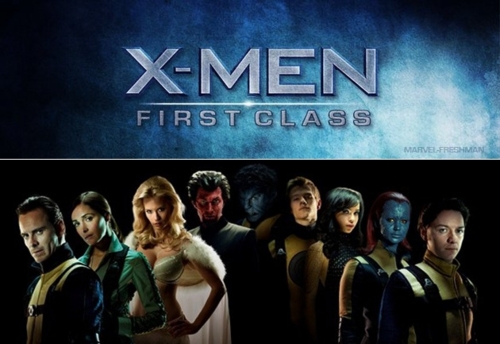 Simply put, this is the best X-Men film yet.

In the early 1960s, young men Charles Xavier (James McAvoy) and Erik Lehnsherr (Michael Fassbender), not yet Professor X and Magneto, come together to form the first X-Men team to thwart the machinations of fellow mutant Sebastian Shaw (Kevin Bacon), who seeks to destroy humankind.

Director/co-writer Matthew Vaughn (Stardust, Kick-Ass), who previously dropped out of directing X-Men: The Last Stand, makes his mark on the X-film franchise with a character driven drama which also delivers more than enough action to keep the audience on the edge of their seats. Appropriate to the time period of the story, a ’60s James Bond-esque aura of coolness is also in the mix. Vaughn creatively rejuvenates the franchise, setting a new standard for what it can achieve, and one hopes he sticks around to direct and co-write further adventures of the early X-Men.

The screenplay by Ashley Edward Miller & Zack Stentz (Agent Cody Banks, Thor) and Matthew Vaughn & Jane Goldman (Stardust, Kick-Ass), from a screen story by Sheldon Turner (The Longest Yard, Up in the Air) and co-producer Bryan Singer (who directed X-Men and X2), provides a sturdy base for the director and cast to stand on.

The film begins with the same Nazi concentration camp scene the first X-Men film opened with in 2000, but then spins out its own story from there. The focus is on the relationship of Charles and Erik as they evolve from strangers to friends to, ultimately, enemies, making it emotionally satisfying in a way the previous films weren’t. There’s a complexity to those characters and their motivations.

Prequels can be tricky, but for the most part this one avoids conflict with the established continuity of the earlier films while enriching the overall mythos. It also resurrects a franchise seemingly in a deep rut after the wreckage left by X-Men: The Last Stand in 2006.

Cinematographer John Mathieson (The Phantom of the Opera, Robin Hood), production designer Chris Seagers (Deja Vu, Unstoppable), and costume designer Sammy Sheldon (Stardust, Kick-Ass) keep the visual tone consistent with the relative realism of the previous films while still bringing a retro ’60s vibe to the party. Some of the sets would feel right at home with 007 and Goldfinger wandering onto them. It’s also nice to see costumes with the same color scheme as those worn by the X-Men in the early comics. The score by Henry (no relation to Hugh) Jackman (Kick-Ass), Gulliver’s Travels) is a nice complement to the story, from dramatic scenes to action scenes. The visual effects are consistently excellent.

After the older versions of Professor X and Magneto were played by Patrick Stewart and Ian McKellen, the actors playing the younger versions needed to bring some acting mojo. James McAvoy and Michael Fassbender not only bring the mojo, they completely make the roles their own, sharing chemistry that makes their friendship believable and their conflicts compelling. McAvoy brings a sense of fun to the young Xavier, while Fassbender’s Nazi hunting Holocaust survivor is driven by darker impulses.

Kevin Bacon is a surprisingly good choice to play the villain Shaw, evolving from a chilling Nazi scientist to a swinging ’60s mastermind. He plays the later Shaw like a classic Bond villain, only with mutant powers, and it works. However, he’s at his best in the early scenes, where he’s physically recognizable but in another sense quite unrecognizable because of the pure evil his character emanates.

The first X-Men team includes Jennifer Lawrence as Mystique, Nicholas Hoult as Beast, Zoe Kravitz as Angel Salvadore, Caleb Landry Jones as Banshee (who seems to be a long lost Weasley!), Lucas Till as Havok, Edi Gathegi as Darwin, and Rose Byrne as the non-mutant Moira MacTaggert (an American CIA agent here instead of a Scottish scientist). Shaw’s Hellfire Club includes January Jones as Emma Frost, Jason Flemyng as Azazel, and Alex Gonzalez as Riptide.

Generally solid acting (although Flemyng and Gonzalez are hard to judge because the script doesn’t ask much of them), but Jones is lackluster as Emma Frost, a character who is anything but. It’s partly how the character is written here, but mostly Jones just doesn’t have the audaciousness nor the charisma needed to pull it off. I won’t spoil two uncredited cameos, but you’ll know them when you see them.

The film also features Oliver Platt as the head of the CIA’s Division X (dealing with the perceived mutant threat), Ray Wise as the US Secretary of State, Glenn Morshower as Colonel Hendry, Matt Craven as the CIA’s director, Rade Sherbedgia as a Soviet general, Michael Ironside as a US Navy captain, James Remar as a US general, and Don Creech as William Stryker, Sr. (father of the principal villain in X2). Veteran actors, veteran performances. They know what they need to do, and do it efficiently.

X-Men: First Class is first class entertainment, the best film in the series so far, blessed with strong performances by the two leads and one hell of a large scale action sequence to end the film. Recommended.