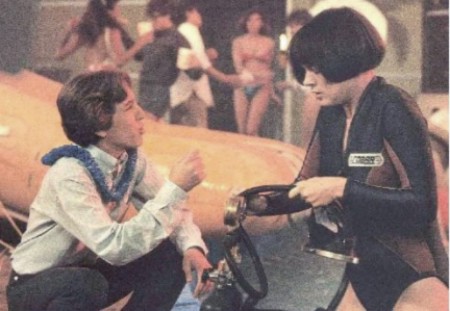 I love the movie Real Genius.  Made in the 80s, it has remained one of my top ten favorite movies ever since, and I think I figured out why.

The Nerd Girl gets her Nerd Boy.  As a matter of fact, he turns down a hot chick for her.  Oh, and she doesn’t wear glasses that, once she takes them off, reveal the inhumanly beautiful creature hiding behind the thick black frames.  Not Another Teen Movie made fun of this trope to great effect, and another of my pet peeve “flaws” given to heroines in all media, clumsiness.  Now, granted, the girl who plays Jordan in Real Genius is still very attractive, but it’s a break from all the “Oh, you can tell she’s unattractive and nerdy because she wears glasses!” shortcuts you get in most films, like, say, Revenge of the Nerds, where the only Omega Mu who gets speaking lines is very obviously a hot actress with glasses and bad hair.

Bad hair, that’s another Nerd Girl trope that pisses me off.  Yes, most Nerd Girls rebel against accepted beauty practices by not doing a lot with their hair, but this usually translates into either long hair, that they may pull into braids or ponytails to get it out of the way, or a short “do” like Jordan’s.  You generally don’t see Nerd Girls  with stupid, badly placed barettes or ponytails all over their heads or whatever, because that takes TIME.  Time you could be spending reading, playing video or roleplaying games, or writing fanfic.  Honestly, I’ve had both the super long, just pull it back to get it out of the way Nerd Girl hair, and what I have right now, which is the super short, all I have to do is brush it out, rub some leave-in conditioner through it, and it’s done, get it trimmed every two or so months hair I have now.  Styles like this are kind of de rigeur for most Nerd Girls.

Cosplay Nerd Girls are, of course, a different story.

But mostly what drives me batshit is that often times the Nerdy Girl, who has loved the Nerdy Boy all along, usually winds up telling him to go to that hot chick, because she loves him and wants him to be happy even if it isn’t with her.  At least in Scott Pilgrim vs The World, you get the sense in part that Knives has gotten over him, when she sends him after Ramona, at least a little bit.  The flip side of this trope is that after the nerd boy treats her like crap, stands her up, etc… for the pretty, popular girl, she still takes him back once he realizes what he’s missed out on, like in Sky High.

The fact is, that Nerd Girls don’t follow the tropes depicted in movies.  We have varying levels of fussing with our appearance, from me with my short hair and fascination with clothing and shoes, to the girls who live in IT vendor shirts and jeans, who keep their hair long so they don’t have to do anything but wash it and put it up. Some of us wear glasses, some have perfect vision, some wear contacts.  Glasses don’t make you nerdy any more than running shoes make you an athlete.  There are plenty of non-nerd girls who wear glasses.  And there are plenty of nerd girls who can pass for normal girls when they want to, if they want to.

Also, just because we’re Nerd Girls it doesn’t mean we’re starving for attention from Nerd Boys or any other boys.  Some of us are queer, some are asexual, some just don’t have time for anyone because we’re busy with other interests or studies.  And some of us are in happy, healthy long-term relationships.  So, yes, once again, the movies LIE.

Also, remember we’ve got the second contest going on for a copy of all four seasons of The Guild.  Send me proof of your charitable donations to Haiti, New Zealand or Japan, and I will choose a winner from those who donated by May 5.