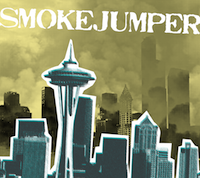 Ok, so our friends Lukas (SPAZ Radio) and Lesley of Girl Game fame, are getting married this weekend.  And as part of the four days of wedding festivities (last night was the bachelorette party), tonight was the Pre-Wedding Punk Rock show!  Four bands, Damage Done, Smokejumper, Destruction Island and Success! all played and played magnificently.  We just got back, and I can’t hear a god damned thing.

The Husband What Rules picked up Joe McDaldno from the bus stop, and we headed down to Slim’s Last Chance in Seattle’s Georgetown district.  We walked in partway through the Damage Done’s set.

They rocked.  Seriously, I encourage you to pick up their album, Scream all of our Cliches.  They rocked their set hard, then two of the guys had to split because of a family emergency.  Hopefully everything’s ok.

Then Smokejumper played, and apart from Chris Crusher being miked way too low, it was another stellar set.  I love Smokejumper’s lyrics.  “I’d like to start a revolution.  I can’t get time off from work,” kind of speak to the problems of being working class and having a social conscience.   By this time I was already hoarse from singing along, and kind of sad that as the designated driver I could not sample the yummy yummy adult beverages that Slim’s had to offer.

After Smokejumper were Destruction Island, and WOW!  They were spectacular, in spite of one of the guitarists breaking a string right off.  Rev from Success! loaned him a guitar until Jake from Damage Done restrung his guitar for him.  But they were tight.  I lost what was left of my voice during their set.  They debuted some new songs, in addition to playing songs off of both Preaches the New Wilderness and Colonial Surf.  They’re high energy, and really, really play to the crowd well.

Ok, I have to say that listening to the lyrics, Destruction Island are what I refer to as Serial Killer Rock, along with The Toadies’ Possum Kingdom.  And the very feminist, socially conscious part of my brain listens to some of the lyrics and goes, “Why am I listening to a band with song titles like “Torso?”  But, I really like this genre of music, and until I found Preaches the New Wilderness, Possum Kingdom had been my favorite album.

Success! finished off the night.  They’d broken up when the lead singer had to move to San Diego, and last night was their first time playing a show together in months.  They rocked hard!  So good!  Apparently, Rev will be moving back soon, and Success! are cutting a new album and getting ready to go on tour with the Hollowpoints.

I have to say, as a veteran of mosh pits from the 1990s, I love this crowd.  I wasn’t in the pit, because I have a screwed up foot and if someone had accidentally stepped on it, there would have been reflexive punching.  So, I stood back and watched and that was the nicest, politest pit I think I’ve ever seen, particularly for one that high energy.  In the 1990s pits got real ugly and violent, and people got hurt pretty frequently.  But this crew really restored my faith in good natured scuffling and high energy horseplay.

The show was a magnificent success, and a fitting tribute to a wonderful couple.  Congratulations Lukas and Lesley!  All the happiness in the world to you!