So, yeah, Nick Spencer.  They guy who made Cap Hydra, then claimed up and down it was for real, it wasn’t a mind control plot. Then it was, which, it may have been a walking back in reaction to fan response, it may have been the plot all along, I don’t know enough about how likely it is to change plots in comics that quickly, so who knows?  But you’d think after generating that much ill will dude would keep his head down for awhile.

So, apparently our friend here has some issues with the fact that SJWs and Feminists were “mean to him.” 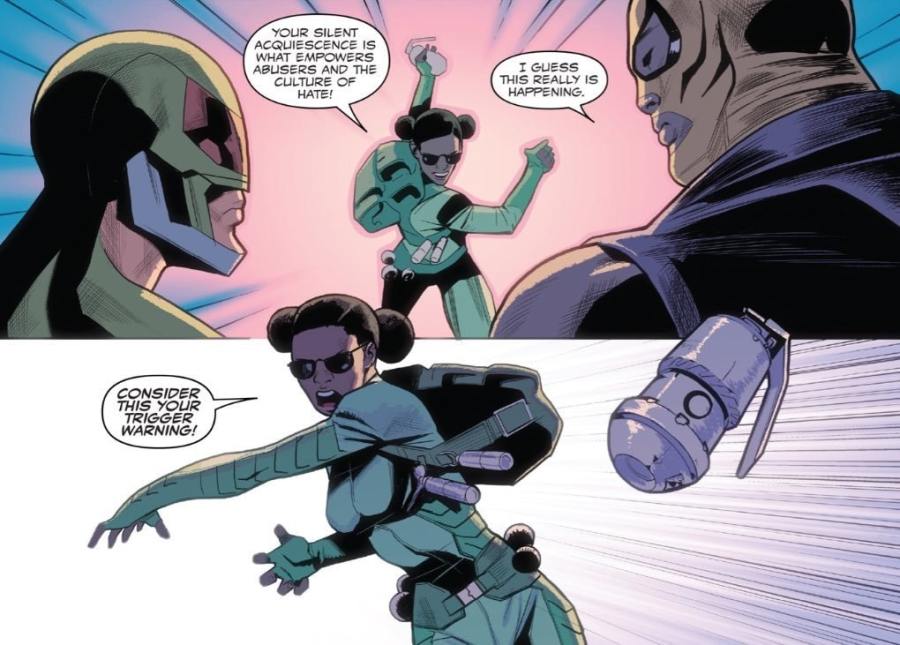 Yeah, I have this vein in my forehead that throbs in the presence of too much entitled stupidity…  I think it just ruptured.

If you want Feminists and SJWs to quit calling you out for your hateful bullshit, quit doing hateful bullshit.  Look, I’m willing to bet you can do some good stuff, and I’d like to see you do that.  But right now?  Right now I am highly unwilling to spend money to support a spoiled man-child who doesn’t get it.

The reason people jumped your shit for the Cap is secretly Hydra thing, is because you explicitly told people it wasn’t a mind control plot (even if it always was).  In the past when other writers have used that exact same plot, they have made it abundantly clear that Cap was being mind controlled, and that all things being equal and comics writing being what it was, that he would come back to himself and punch some Hydra shitheads.  That’s what I look for in people writing Cap.

And I am not at home to the “Oh, well, he’s just giving us the Cap we deserve,” crap.  That’s Batman, or Iron Man.  You already have your super cynical asshole heroes. Let those of us who want to be better have one, just one.  Come on.

The other reason that there was more of a hue and cry this time is the changing demographic of comics fans.  The last several dozen times the “Cap is mind-controlled into thinking he’s Hydra” storyline was trotted out (could we try just a little harder to be original, maybe let Cap be bisexual or gay or SOMETHING new.  Hell, asexual is great if you’re going to be squeamish about weiners), comics fandom was overwhelmingly cis het white dudes.

Cis het white dudes have never been the totality of comics fandom, but they have been the majority for a long time.  They aren’t any more, and the writing really needs to keep up with the times.

Anyway, back to this issue with the mean SJW villains.

Ugh, you know what.  Fuck it.  Nick Spencer, if you’re going to throw a tantrum like this every single time you get called out for doing something boneheaded, you have two choices.

The world is FULL of dudes who are constantly on about how they’d totally be on “our side” if only we were nicer, calmer, quieter, didn’t upset them so.

Comics writing needs to evolve with its audience or it is going to go the way of the dodo.  And in some areas it’s been doing pretty awesome.  Ms. Marvel, The Unbeatable Squirrel Girl, Captain Marvel, Spider-Man (with Miles Morales)…  It isn’t all dude-bro bullshit.  I mean, shit, in the issue that screen cap is from, it has Sam Wilson as Captain America and Joaquin Torres as the new Falcon.   Great!  You’ve got brown dudes, Spencer, that’s fantastic!  I am very (unironically and non-sarcastically) proud of you.

But get over the fact that you got called out for a bad idea last year, and move on.  Wallowing like this is not very becoming.  It just makes you look over-emotional and unable to view the situation with anything like rational perspective.

See what I did there?

Not sorry even a little bit.