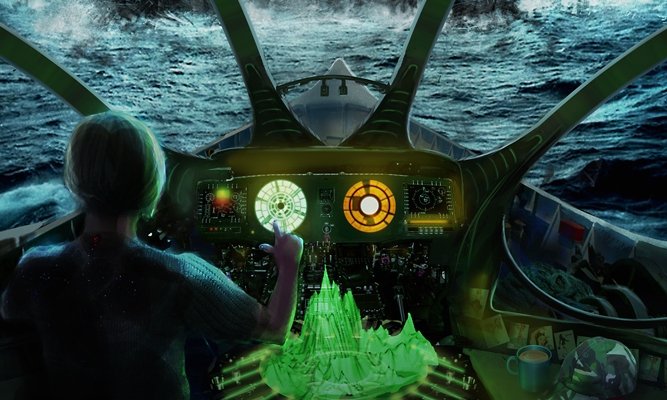 Ok, so I was fortunate enough to meet the lovely and talented Ms. Rambo at Norwescon this spring, and pick up a copy of this book to review.

Needless to say, I am late.

But…  I loved the book!  Once things settled down enough that I could actually sit and read the book, boy did I read it.  I read the hell out of it.  I ripped through it pretty quickly.  The book is called Near + Far: Stories of the Near Future and the Far

.  The “near” future stories start at the usual “front” of the book.  These deal with people living in a future that’s still fairly recognizable, if more fucked up than ours, but still very relatable situationally, I feel.  The “far” stories start at what would typically be the back of the book, but what becomes the front if you flip it.  These stories deal more with star travel and contact with alien races.

All of the stories are wonderful, but I’ve pared down my favorites list to just a few.

“The Mermaids Singing, Each to Each” is set in a world where the economic injustices are even more one-sided than they currently are, and focuses on the problems of betrayal of trust, gender fluidity, and revenge.  Many people may find facets of this story problematic, in part the main characters motivation for the changes they make to their gender, but I feel it’s handled relatively sensitively.  I felt that Ms. Rambo handled the survival of sexual assault with a great deal of sensitivity, and that meant a lot to me.  “Close Your Eyes” is a great examination of sibling rivalry, particularly where one sibling is resentfully dependent upon the other.   “Memories of Moments, Bright as Falling Stars” has a very Gibson-like feel to it, but is even more focused on the people than the tech.  These are all from the “Near” section.

The story from the “Far” section that most grabbed me was, “Angry Rose’s Lament.”  For a couple of reasons.  The first is, it is an excellent examination of what falling in love is really like, how no matter how well you know the person, you’re still trusting that they haven’t lied to you.  And it is also a perfect allegory for my feeling’s after Richard Wright’s death.  For those of you who aren’t familiar with PNW Fandom, Richard Wright was a larger than life figure who helped run conventions and considered it his life’s goal to draft young blood into that role.  He also partied like a rock star, and was just… Richard was fun.  Well, either you felt Richard was fun, or you very much didn’t.  No one felt lukewarm towards the man.  When he died over a decade ago, I felt betrayed by him, because if he’d just… followed doctor’s orders, gotten more exercise… I’d visited him in the hospital when he had his previous heart attacks, and taken him a little stuffed gorilla.  I was angry at Richard for not taking better care of himself, for not eating “better” yada yada yada…  But Richard didn’t want to live a lo-cal, low sodium, flavor free life.  Richard enjoyed life as much as anyone possibly could, and he made a decision to keep living the life he loved, rather than eking out a few more years without fun.

I get that now, but “Angry Rose’s Lament” articulates everything I felt about his death at the time he died in the 90s.

So, yes, I encourage you to go by Cat Rambo’s collection,  Near + Far: Stories of the Near Future and the Far

.  They’re well written, well-paced, and hit on many levels.

Oh, and Honey Badger’s first two songs are available for download here, for free or pay what you want.  We’re also part of a larger compilation to benefit a local venue, with a song written by yours truly.  Check it out (we’re track 16).  We’ve also got a show at the Kraken on July 13th.