SPOILER WARNING! BEYOND THIS POINT, THERE ARE MAJOR SPOILERS! READER BEWARE! 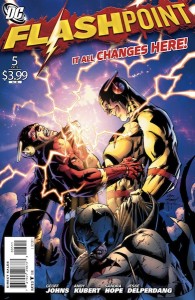 It all ends here. The DC Universe as we know it. The DC characters as we know them. As finales go, this is a big one, and writer Geoff Johns delivers a game-winning grand slam, concluding with our first glimpse of the Nu DC Universe.

To summarize Flashpoint up to this point, history has been changed, apparently by the Flash’s arch-enemy, Professor Zoom. There is no Superman, just a Kal-El kept locked away by the US government. America’s greatest superhero is Cyborg. Bruce Wayne is killed in the alley as a child, while his parents survive, his father Thomas becoming Batman instead (while his mother Martha is driven mad and becomes the Joker). Much of Europe has been destroyed in a war between Themyscira’s Queen Diana (Wonder Woman) and Atlantis’ Emperor Orin (Aquaman), and their conflict now threatens the planet.

The Flash (Barry Allen) remembers the way things should be, but the longer he’s in the new reality, the fuzzier his memories become. In Flashpoint: Kid Flash Lost #3, Kid Flash sacrifices his life to give his grandfather Barry the power necessary to reset the timeline. In this issue, after Professor Zoom is defeated, Barry finally uses that power. Since his memories are fuzzy, things aren’t reset precisely as they were, which ushers in the Nu DCU.

There are some action scenes here, like Barry confronting Zoom or his allies confronting Diana and Orin, but Johns allows the best parts of a story rebooting an entire fictional universe to play out in character moments.

Barry learning his own attempt to go back in time to prevent his mother’s murder at the hands of Zoom is what really shattered the timeline. A dying Thomas Wayne giving Barry a letter intended for Bruce. Barry telling his mother that if he resets the universe, she will be dead again. Post-reboot, Barry delivering the letter written by Thomas Wayne to Bruce, who’s Batman once again. Bruce reading the words “Love always, your father” and breaking down in tears of joy.

I will go further and say that last bit is one of the finest character moments ever afforded Bruce Wayne. Most of this sequence plays out without dialog, with only Andy Kubert’s superb artwork to carry it along.

I enjoyed Flashpoint‘s creative twist on familiar characters. Geoff Johns demonstrates once again why he’s one of the best comics writers currently in the industry. Even his big events come back to the characters, and isn’t that why we read comics, because we fell in love with the characters?

It’s fitting that the first official story set completely in the Nu DCU is also written by Geoff Johns. That said, the Nu DCU kicks off with mixed results.

The story opens five years ago, when superheroes are still brand new. Some, like Batman, are considered urban myths. The police are hostile to Batman, while citizens see superheroes though a prism of both uncertainty and awe. Which admittedly is what would likely happen if superpowered people suddenly appeared in the real world.

While chasing an alien across Gotham City rooftops, Batman encounters Green Lantern for the first time. Green Lantern is shocked that Batman is urban reality rather than urban myth. Batman doesn’t believe Green Lantern is part of a galactic police force. When Green Lantern realizes Batman has no powers, he responds with, “you’re not just some guy in a bat suit, are you? Are you freaking kidding me?!” The two alpha males get in each other’s faces.

Batman demonstrates what a badass he is by taking Green Lantern’s power ring right off his finger. Maybe he does have a superpower. Badassery is a superpower, isn’t it?

When they catch up to the alien underground, it explodes after a cry of “For Darkseid!” Green Lantern and Batman wonder if there’s a connection to the only other alien on Earth they know of, Superman. They track Superman down in Metropolis. Green Lantern thinks he can handle Superman. Green Lantern gets sent flying by a single Super-punch. Superman challenges Batman with, “so…what can you do?” To be continued next issue.

During the story, we also get a glimpse of high school football star Victor Stone, who will eventually become the superhero Cyborg and a member of the Justice League.

Geoff Johns’ characterizations of Batman and Green Lantern are right on the mark. His Superman hints at being more rough and tumble in the Nu DCU, and less the big blue boy scout, a shout back to the character’s origins in the 1930s. The dialog is often quite funny.

On the other hand, too much of the plot revolves around the trope of heroes meeting for the first time and coming into conflict, especially of the physical variety. I realize DC is trying to attract new readers, who will be unfamiliar with the usual tropes, but for long time readers, we’ve seen it over and over again, and one more over besides.

Which begs the question, is it so overused as to be a tired cliché or has it actually become an archetypal plot device? I don’t know. What do you think?

Artist Jim Lee has redesigned the costumes, and they have a bit of a 1990s Image or Wildstorm vibe that isn’t working for me. I really dislike Superman in body armor, but apparently Action Comics will explain the costume, so I’ll withhold final judgment for now. Urban vigilantes like Batman look right in body armor. Superman’s skin is his body armor.

In summary, Justice League #1 is a mixed bag for me. Some of it works, some of it doesn’t, but I certainly want to read the next issue.