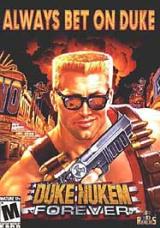 Wow.  I don’t think I have ever read such a damning review of a videogame in my life.

Ars Technica’s valiant videogame reviewer, Ben Kuchera, has played Duke Nuke ‘Em Forever so that none of the rest of us ever have to subject ourselves to it.  I knew it was going to be bad, what with all the pre-release stuff about the “Capture the Bitch” level, and all that fun stuff.  However, apparently, thanks to Mr. Kuchera, we know how much worse than that it can get.  Things like the pee in a urinal and fish out poop level, the twins who give Duke a blowjob at the beginning, who later in the game after they’ve been raped and impregnated by aliens, beg Duke to save their lives while promising to lose the “babyweight” for him.  Yeah… The best part is that in order to progress you have the choice of killing the women yourself, or waiting until their alien pregnancies cause them to explode.

Yes, the women have to die in order for  you to progress in the game and no one seemed to think this was a bad idea.  The Geek Husband What Rules, on hearing about this said, “Wow, and I thought it was fucked up when you had to kill the surrendering German soldiers in that one Call of Duty game.”

I’d rant further and more, but honestly, Ben Kuchera said it all.  And I wish I could buy this man a drink to ease the pain of having had to play this steaming pile of shit.  But, as many folks have said, when a project kicks around as long as this one did, and between so many developers, the chances of it being even remotely good are somewhere between slim and none.  In the case of Duke Nuke ‘Em, apparently they’ve decided the only way to success is excess, and they’ve clearly exceeded even the lowest of expectations.