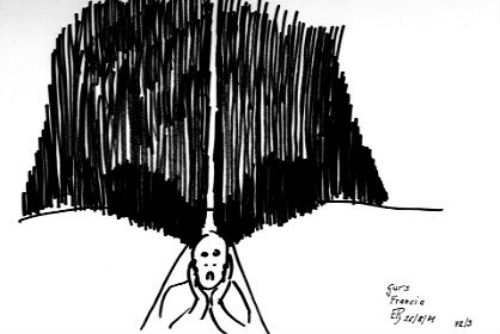 Ok, so now that you’ve talked to your players about including horrific, adult type stuff in your games, how do you do that?

The types of games we usually include in this category include horror, porny, gut-punchy, and romance.  Porny and romance can be the same, or different games/categories entirely.

Now, some people focus on atmospheric things while running horror, like soundtracks, dimming lights, candles, special effects CDs and little buttons programmed on a synthesizer or computer.  And I’ve done soundtracks with mixed results.  Dimming the lights can also be effective, as can having cats who do shit like leap up onto people’s laps with no warning at tense parts of the game.  But I think there are more effective ways to horrify or frighten your players, especially if they are at all invested in their characters, than external means.  I mean, yeah, you can startle your characters by suddenly yelling or throwing something, but it wasn’t really your scary thing that scared them.  It was your sudden motion or whatever.

The Geek Husband What Rules has some excellent ideas.  He doesn’t play in horror games, but he runs some incredible horror, especially Don’t Rest Your Head.  Include all five senses.  His example:
“You’re in a long, cold hallway.  The air conditioner is going full-bore, so the air is full of roaring, and a squeaky fan belt.  You smell formeldahyde and… Is that cotton candy?  The fluorescent lights are flickering, and there’s a gaunt shape at the end of hallway, wearing nothing but bandages made of human faces.”

Incongruous sounds, smells, and sights are a great way to freak people out.  I used to have a desktop theme on my computer that was a “Calvin & Hobbes” theme, and one of the features was a child’s giggle when you hit a button.  I used to leave it on at night, until the night a cat stepped on the keyboard, and a child’s merry laughter rang through a house with no children in it, at 3am.

THAT was the scariest damn thing ever.

I didn’t sleep for the rest of the night.

It scared me even more than the night I watched The Ring alone in the dark, and then a cat stepped on the remote and turned it on to snow at 2am.  And you can do this with lots of things, like a pretty, lacey doll, perfectly clean, sitting in the middle of a bloody room.

I myself am very into “incomplete” descriptions.
“You see dark shapes at the end of the hallway.”
“What are they?”
“Roll Perception.  Ooo, you don’t know, but they’re coming closer.  It kind of sounds like metal scales rattling on the tile floor, and there’s this weird, musty, leathery smell rolling down the hall.”

Another of the GHWR’s tips is to do something to the character’s face, a lasting, scarring, maiming wound. Pull teeth, cut a cheek, or an eyelid, or eyes themselves.  Teeth especially get to a lot of people because of dental phobias.  To this, I add joints.  People freak when you talk about doing something to a joint.

Ok, now this one’s long.  Guess you get Romance and the Sexins in the next post.